Want to contact me? Send me a message at alvaradopinero.eduardo@gmail.com. I'm Eduardo Alvarado, 2nd-year Ph.D. student at École Polytechnique in Paris (France). I work at the Geometric and Visual Computing (GeoViC) group, under the supervision of and . I am part of the Marie Skłodowska-Curie Innovative Training Network CLIPE, funded by the European Union Horizon 2020 framework.

Prior to my Ph.D., I got my M.Sc. in Embedded Systems and AI at Albert-Ludwigs-Universität Freiburg in 2019, while I was working at the AIS group, ZF Friedrichshafen, and writing my thesis on Deep Multimodal Learning for Autonomous Driving at Robert Bosch GmbH, advised by Prof. Dr. Joschka Boedecker and Prof. Dr. Abnihav Valada. I completed my B.Sc. in Electronics and Automation Engineering at Universidad Carlos III de Madrid in 2014, advised by Prof. Angel Garcia Crespo.

My research is centered on plausible, interactive and multi-scale 3D animation (physically-based, kinematic) for humans and animals in dynamic and deformable environments, with focus on authoring tools for the entertainment industry (games, VR). Forces in Unity: The Basics

In this post, we explain how forces in Unity works. How laws of physics work in the real world are pretty clear. However, a physical simulator (like PhysX, the one Unity uses, or many other that you are used to see in games) can make different assumptions, which do not necessarily match how it happen in the real world.

A rigid-body is a solid element whose dynamics are estimated with respect to certain center of mass (a point) that represents the body. To move rigid-bodies in Unity (or many other game-engines using a physical simulator to move objects around), you can do it in different ways:

However, the first two methods to move a rigid-body in a simulator have some (big) problems. You should never move objects directly by defining their position, as it might cause instability issues in your simulator. Defining the velocity might be correct, but this could also cause certain issues when the object interact with other forces. [todo]

Defining the acceleration of the object seems the proper way to go, and considering that rigid-bodies have a mass, the most physics-friendly method to interact with them is by applying a force.

Although forces directly control a body’s acceleration, the velocity and the position are only controlled indirectly. This is a problem when you need immediate response. However, applying a force helps you to keep every motion coherent with respect to any constraint in the scene (such as joints).

Real world is continuous. As such, high-school teaches us that:

However, in a game-engine, which aims to run a game frame-by-frame, this might change. Applying forces continuously could lead  to ever increasing velocities and eventually, a failure in the physics solver. To avoid this, PhysX accumulates the acting forces on a body before each simulation frame and then are set to zero before the next frame.

In PhysX, accelerated motion is estimated using the following formula: 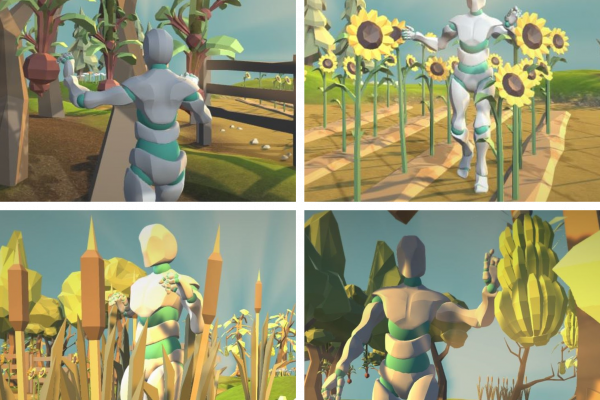